A Guide to Embedded Lending: What Is It and Why Is It Important?

6 Reasons You May Need Invoice Discounting

Invoice financing can be a great benefit to any company in need of additional cash but is having difficulty getting approved for a loan. It's important to recognize when you might want to consider using invoice discounting. You'll learn about six different reasons in this article.

Invoice financing is sometimes confused with invoice factoring but they are not the same. You'll learn the differences between these two as well.

What Is Invoice Discounting?

Before discussing what invoice discounting is, let's recap the workflow involved with traditional invoicing: A customer purchases a good. The company invoices the customer and extends credit. This is reflected in the invoice due date, which might be net 30 or net 60. If the customer takes 30 days to pay the invoice, the company must still pay its suppliers and operating expenses. Since the company doesn't yet have money from the customer, these costs must somehow be covered.

This gap between paying suppliers and operating expenses and the time it takes to receive payment from customers is financed with working capital. Of course, if the company doesn't have enough working capital to cover its expenses, it will have to borrow money. One financing option is to use invoice discounting.

Unlike invoice factoring, there is no factoring company collecting payment from customers. Instead, customers are not even aware that invoice discounting has occurred. This can often be a positive for companies since invoice factoring can reflect poorly on them. The financing company will take a percentage as a fee of your accounts receivable value that is being financed.

It was mentioned earlier that invoice factoring doesn't impact your customers and remains hidden from them. You'll want to check with the financing company to be sure that is the case. You can guarantee confidentiality through what is called confidential invoice discounting (CID). With CID, customers and suppliers have no idea that you are financing your invoices.

Any business owner who has tried to get a traditional loan from a bank knows the uphill battle involved. Banks simply aren't that interested in small loans mainly because there is very little profit in it for them, compared to other types of financing. Another drawback is the length of time it takes to get approved for a bank loan. The process can take weeks to months to complete.

Invoice factoring can be a quick option. But this will depend on the factor you're using. It can take a few days to get approved and receive funds. With invoice discounting, funds are often available within one or two business days.

Because invoice financing generates cash, it will instantly improve cash flow and working capital. The term "instantly" is used because companies will then decide how they want to distribute the cash.

It should be noted that there is a clear difference between cash flow and working capital. Cash flow appears on the statement of cash flows. It is a measure of cash flowing into and out of the business. Cash flow is measured over a period of time such as a month, quarter or year.

Invoice factoring can cost 0.5% up to 5% in fees. This calculated is against the value of your accounts receivable. There are often other fees involved with originating the loan. In contrast, invoice discounting usually falls between 1.5% to 2.5% in fees. There are no other fees to contend with.

With invoice factoring, you basically hand over your entire accounts receivable to the factoring company. This locks in your A/R for some extended period of time. Invoice factoring doesn't have such terms and conditions. You can be selective about how much of your A/R you want to finance.

Businesses that are having cash flow problems often find they are not able to pay suppliers and thus end up with inventory shortages. In this case, the company may allow customers to continue placing orders because it needs the cash. But at the same time, it is unable to fulfill new orders. Since invoice factoring provides an instant injection of cash, the company will be able to pay suppliers and replenish it's depleted inventory.

Is Invoice Financing Right For You?

Now that you are armed with six different reasons as to why invoice financing may be a great financing option, you'll be able to make a well-informed decision when the time comes. 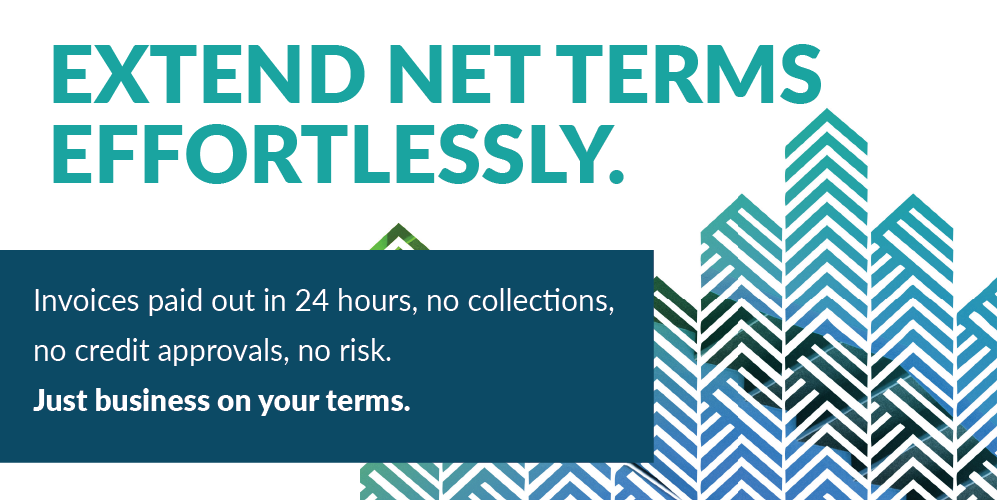 About the AuthorBrett Romero Brett Romero combines copywriting and content marketing expertise with deep Finance, software and IT industry knowledge to produce marketing content that engages and converts.

An easy way to speed up cash flow without invoice discounting.

Find out how you can drive cash faster into your business with these simple strategies. Grant Burrall
August 8, 2022
A Guide to Embedded Lending: What Is It and Why Is It Important?